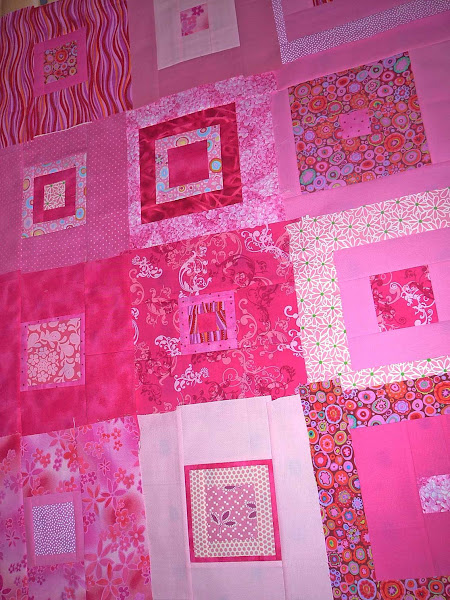 Thank you for all the lovely comments about my finished Blue and Green Askew Squares Quilt in the last post. I finished sewing the rest of the pink squares yesterday. These ones I aimed to make at least 9.5 inches square. I'll admit I am sewing these to fit a piece of wadding! Not too sure about that extra pale pink one at the bottom but hopefully it will blend in. 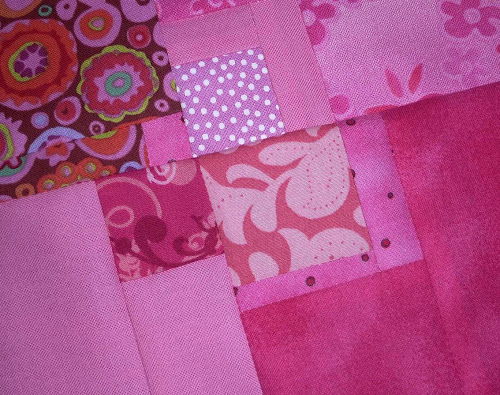 So here I have sewed one up, four quarters cut and sewn back to make a square. Thanks to my macro lense on the camera, you can see the center doesn't match up! I took this photo for the lovely Lynne though. She was asking about the size of the inner most square. Not big enough now I say Lynne! The little one above is now half an inch, so an 3/4ths and inch before it got sewn together and 1.5 inches before it got slashed in quarters. Too small I think for next time, learning curb as always, 2.5 inch minimum for the center square on the next one!
Posted by Helen at 8:29 PM 6 comments: 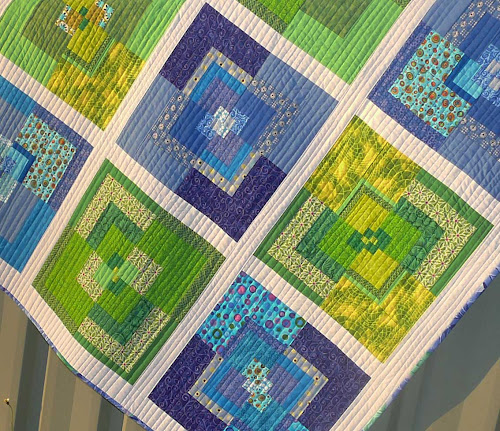 I feel like I should rename this blog the Weekend Quilter. The only sewing and blogging action seems to happen on the weekend. But I suppose that is better than no quilting action at all! I'm happy with the quilting on this, but next time I think I might try a white thread. 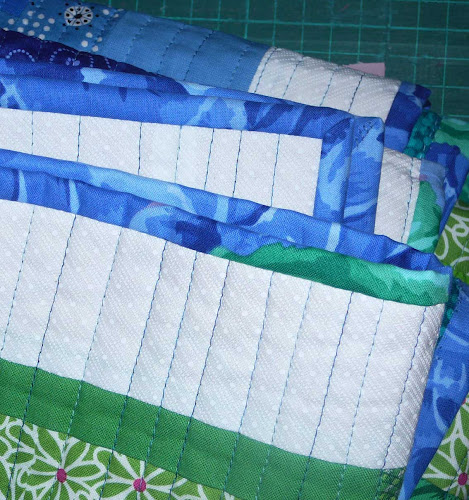 I did get the binding on this quilt though! I used Kaffe's blue and green cabbage print for the binding. At first I though nooooo, can't bare to cut it up. But then I thought if I don't use it in this quilt, it will just stay folded up in a drawer where no one will see it. Why not use it on a quilt where it will get seen and appreciated. So I sliced some strips of it! 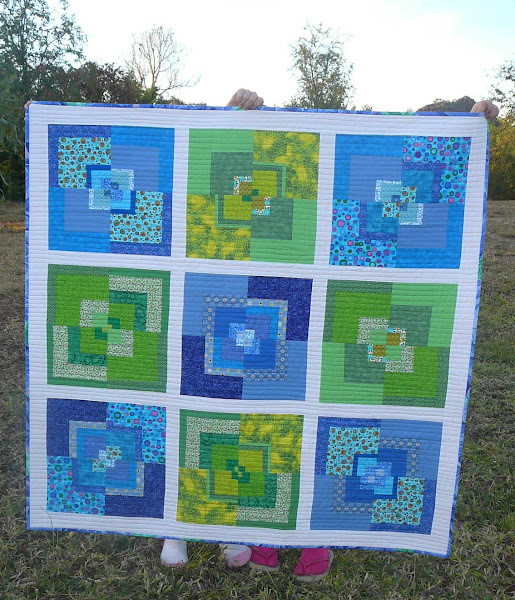 I asked the girls to help me take the photos. We went across the road where there is a patch of tamed wilderness. Pink socks and thongs, nice look Grace! I'm going to enter this one in the local agricultural show which is on next month and then pass it onto it's new owners.
Posted by Helen at 10:33 AM 24 comments: 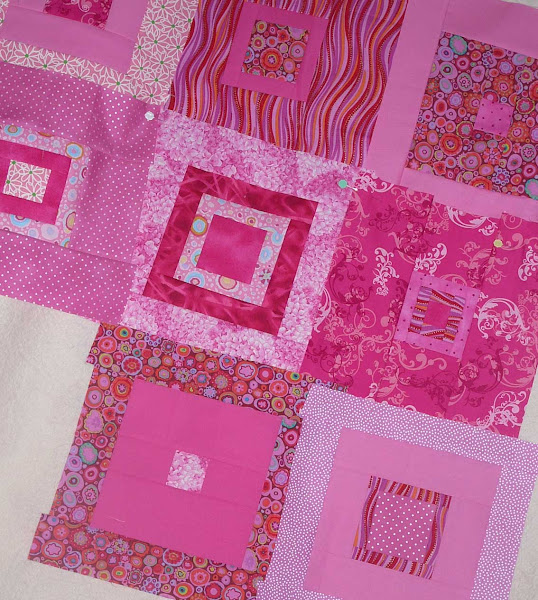 I started another Askew Squares quilt on the weekend. Just for something to sew. :)
Posted by Helen at 10:18 PM 10 comments: 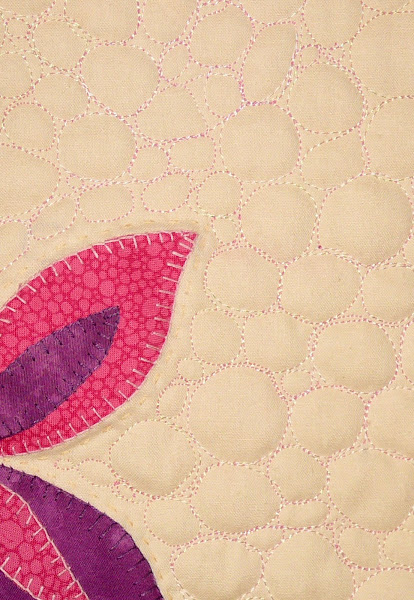 Daz has worked all weekend. One word to say, reports! Ewww!! As a parent, love getting them to read, as a wife of a teacher, well I can say goodbye to seeing my husband for the next few weeks. But on the plus side, I have lots of time on the weekend to sew and Daz actually said to me during the week that he was lucky I had my quilting to keep me amused. He is the lucky one??! *ahem!* Okay, I'll let him think that! So I used my time on the weekend to do some quilting. I have had the above mini quilt pinned up on the felt wall for months, just waiting to be quilted. So I started on that. White thread on top and pink underneath which is creating a shimmering effect. I always used to swear on same thread top and bottom, but for this one, hey living on the edge in quilting land! 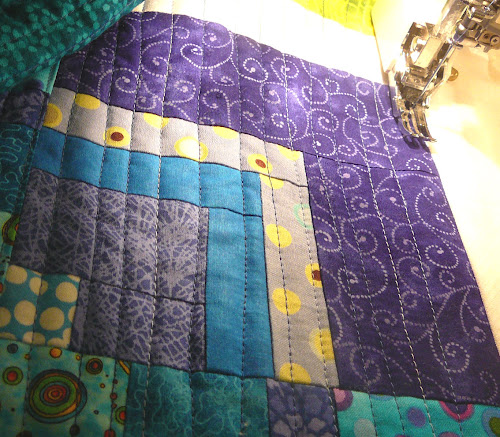 Then I put the walking foot and got started on my Askew Squares. Just straight lines here. Up, then down, snip the thread then up and down again. Took 4 bobbins of thread and this time I did use the same thread top and bottom. I measured my lines by eye and the seams of the piecing, I didn't mind the wonky look. So hopefully during the week I'll get the binding on. Hopefully.....
Posted by Helen at 9:48 PM 12 comments: 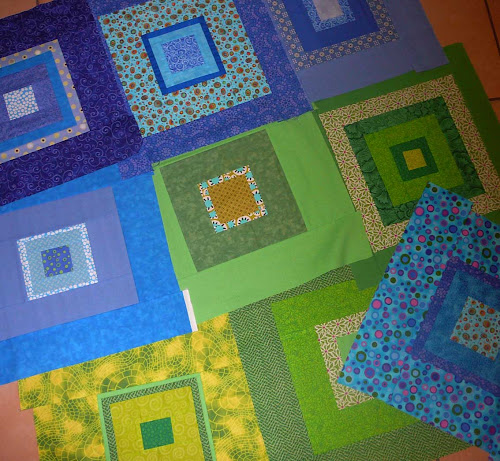 When I was sewing squares for my Rainbow Squares Quilt recently, I sewed a few extra for an idea I had. I'm sure it has been done somewhere before in flickr or blogland, but this is something I thought of while sewing all those squares, sort of a wonky Bento Box but all the Bento's coming from a different box. I don't know what to call it. I've just spent the last 20 minutes googling other words for wonky and square. How about Askew Squares? I've had the idea since the start of the year to make a blue and green quilt for friends who have left town, green to symbolize where they used to live, and blue to symbolize living by the ocean where they are now based. 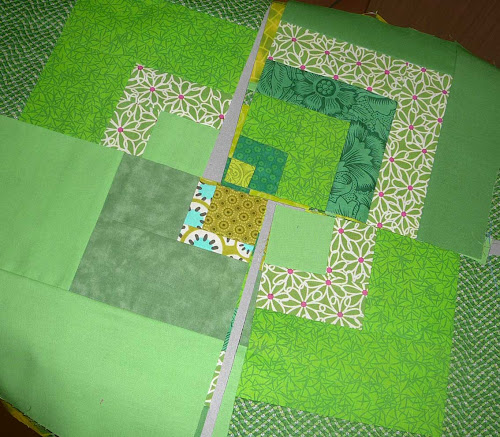 So I took 9 squares, sliced them into quarters.... 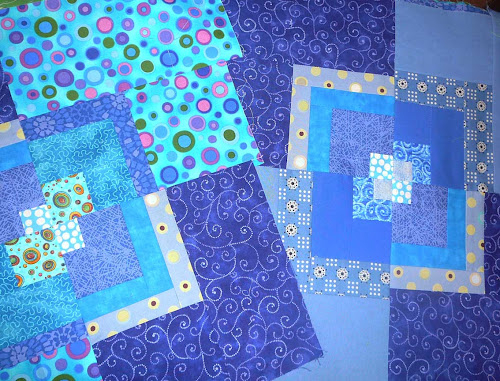 Then rearranged them back together in pairs and sewed them back into a square. Maybe next time instead of cutting them into quarters, it could be cut on another angle? Possibilities! 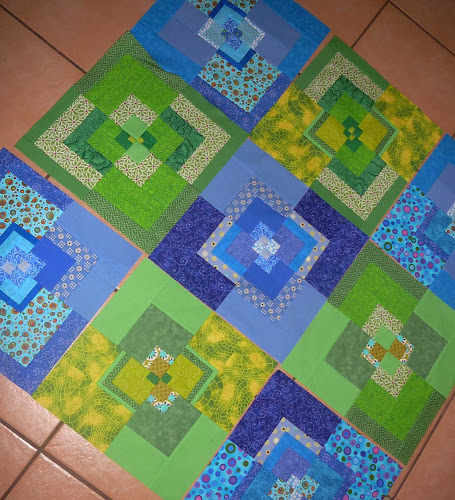 Then wolah, 9 new different blocks trimmed down to 13 inches. 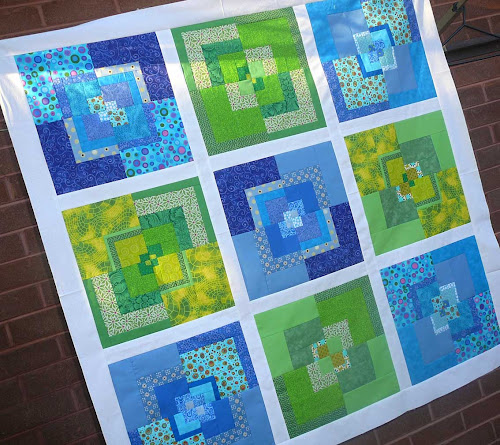 I decided to sash it with white and wolah, lap sized quilt top finished. Milly came in as I was loading this picture and I asked her "What does this quilt look like to you?" Her answer, "A square quilt that looks like green patchy grass and blue sky." Which is perfect.
Posted by Helen at 6:16 PM 13 comments:

Around the Block 2 Update. 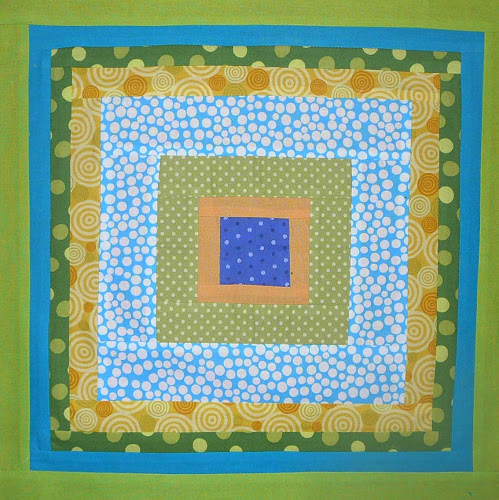 I received this block from Louise recently, love all the combination of dots! 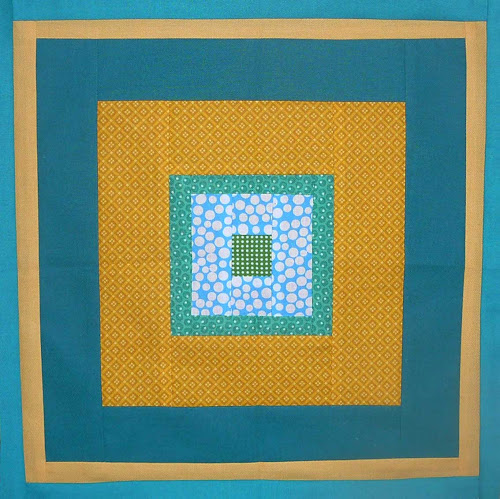 And then this week from Kate this one arrived. Thank you ladies! I love them both!!! 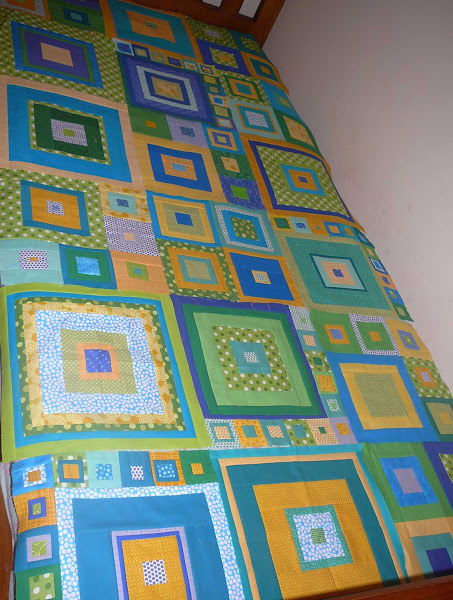 So I now have 18 blocks and spread out on Grace's bed, it looks fantastic! This is 3 blocks wide, I think I'll make it 4 and then it will be finished!
Posted by Helen at 9:15 PM 5 comments: 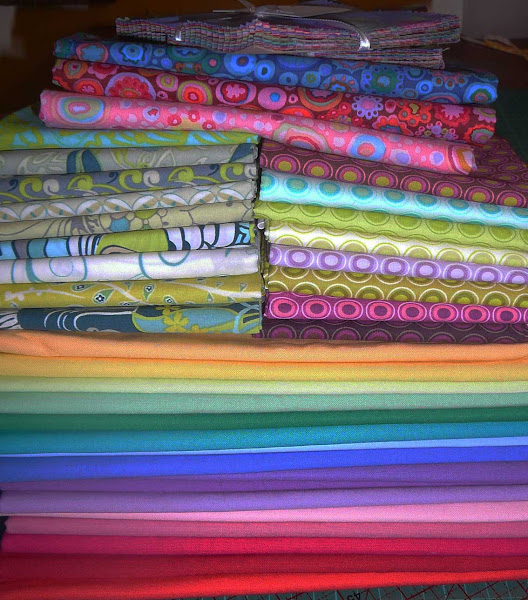 I used my recent birthday as a treat to buy myself some fabric. I know, one doesn't really need an excuse to buy fabric, but that was how I was justifying two purchases! So this is what 14 yards plus two charm packs look like. 8 yards of Kona Solids from the Fat Quarter Shop with delicious names like daffodil, clover, honey dew, pansy, peony and pistachio. And then on the top a bundle from the lovely Jackie at Canton Village Quilt Works. She had a 15% off Facebook page special the other week, bingo, I was there! A bundle of Oval Elements FQ's, two of which have already made it to the backing for my Rainbow Squares Quilt. And a bundle of FQ's called Filigree which I have no idea what to sew with, they just looked pretty. Some Kaffe on top including two charm square packs which I'll quietly admit, some of the prints in this collection are ugly! Uggggggly! But I don't want to untie the ribbon.....
Posted by Helen at 4:06 PM 11 comments: