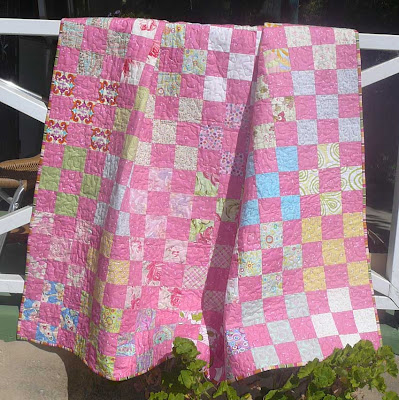 We are still in Rottnest and still waiting on the call for Daz's placement..... but the sewing goes on in the meantime, well a little bit of sewing. I sewed the binding on this quilt and brought it over to do the hand sewing in time to finish it for my Mother In Law's birthday on the 3rd. I have finished ahead of schedule! 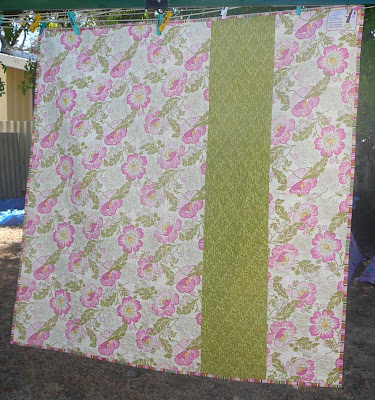 I really like the back of this quilt. I used some green left over from this Christmas runner. And I was short just half a metre of the Amy Butler print so the lovely Cass posted me some over and it was enough exactly! 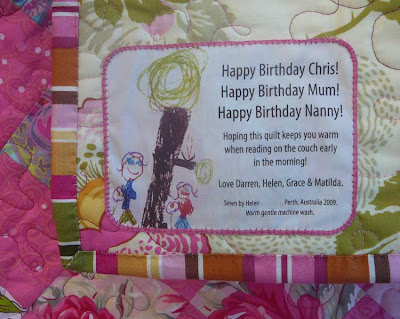 The binding was from half a metre that the lovely AJ posted over awhile back for my birthday I think. From the Soiree line, so pretty, perfect for all the colours in this quilt. MIL has a habit of waking at 3ish and reading on the couch cause she doesn't want to disturb FIL, so I thought this quilt would be the perfect size to snuggle up on the couch with.

She was there when I opened up the envelope from Sheridan with all the finished blocks and I explained the swap to her but not being a quilter I don't think she got it. So with that in mind I didn't put on the label that it was part of a swap. If it was a quilt intended for me I would have though. Hope that doesn't offend any of the ladies involved in this swap. Don't think it would, just wanted to explain though. 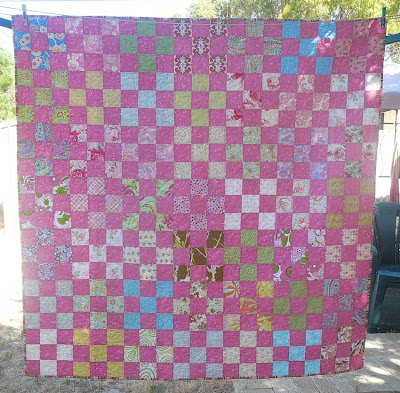 Here it is on the line. I think about 150cms square? Maybe a bit bigger. I have no tape measure here to check. 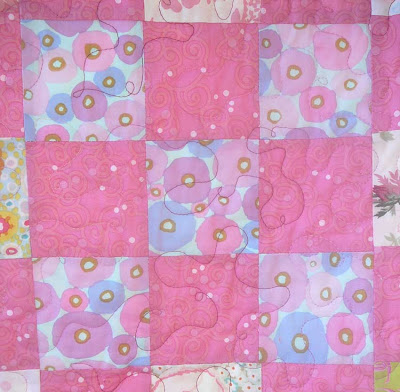 For the quilting I just did a meandering stipple with some loops thrown in. Thanks to all the girls in the Chalet Girl Block Swap that made this quilt possible.

Happy New Year everyone!
Posted by Helen at 4:07 PM 6 comments: 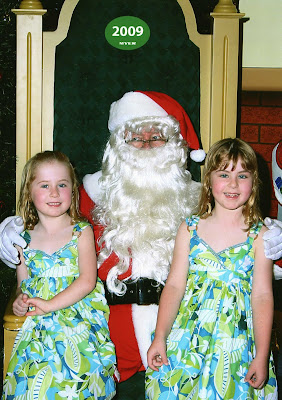 This years Santa photo.... I don't like it! Santa has weird eye's, his hands are hovering over the girls shoulders, it was rushed, I should have insisted another set was taken to choose from, Daz said naaaaa, this one is okay. Lesson learnt, never let a man pick the Santa photo!

That aside, Merry Christmas to all my readers on my humble blog. Thank you all for your lovely comments. I hope you all have a Merry Christmas and Santa brings you something quiting related. We are away on holidays for a few weeks, I don't know how great the magic stick will be in it's coverage, so I'll say Merry Christmas now and see you next year!
Posted by Helen at 7:10 PM 11 comments: 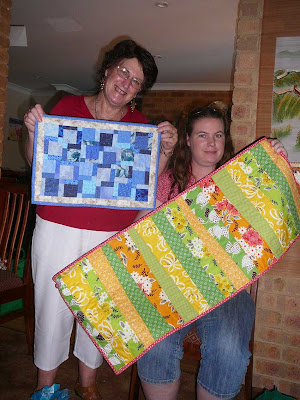 We had Christmas celebrations a few days early with my side of the family as we will be here with Daz's side of the family on Christmas Day. So Mum and Andrea happily received their table runners! I must say both ladies were slack and didn't keep up their end of the Christmas Table Runner deal.... but I felt pleased I had finished all mine. :)

Now back to the binding on the MIL's birthday pressie....
Posted by Helen at 2:33 PM 3 comments: 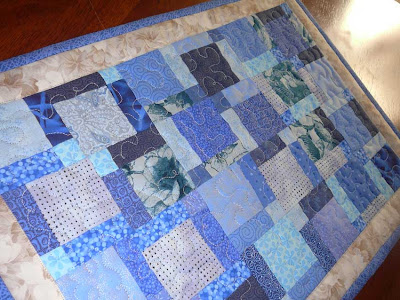 The Christmas Table Runner madness started here and now 6 weeks or so later, it is over! Yahhh! I'm a bit over Table Runners at the moment I must admit. Here is the last one, #6. 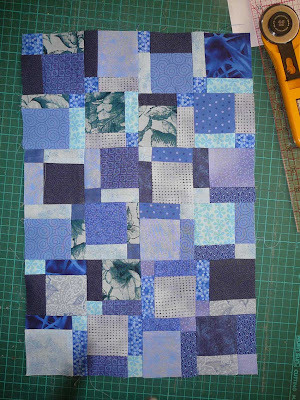 Another Disappearing 9 Patch Block. But this one is small! I cut the squares 2.5 inches and they are from my stash, well some are and some are from Mum's stash. This is her runner and she giggled on the phone the other day that she hasn't even started mine, typical! They have just brought a new caravan and so Mum wanted a runner for the table in that. The table measures 20 inches wide and 40 inches long, so not exactly a large table! 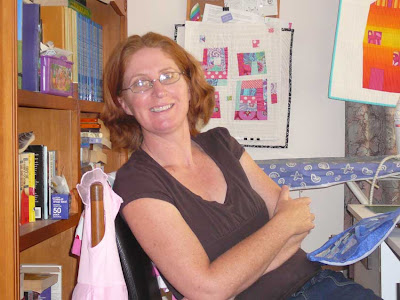 Matilda snapped this shot of me putting on the binding. Not looking to bad for a girl who has sewn six table runners in six weeks! That is my in-laws bookcase behind me, if it was my house that bookcase would be packed with fabric! Note the two lovely dolls quilts received in the background as well. :) 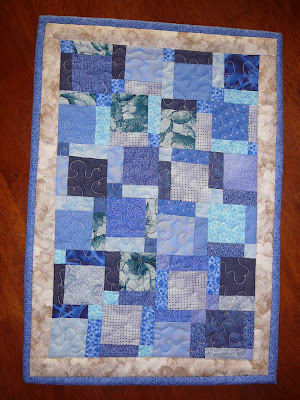 So here is runner #6. 18 x 13 inches, more a placemat size really. But seeing as though the interior of the van is hues of blue and cream, this should match perfectly. I hope.....
Posted by Helen at 10:07 AM 6 comments: 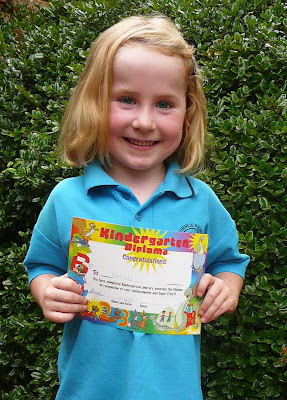 Matilda graduated from kindy this afternoon. Seems only like yesterday she started the year. You don't really get a report as such in kindy, just a big scrapbook with all the work done throughout the year. The teacher writes a wrap up paragraph on the end page. Matilda's was glowing about her lovely manners, excellent fine motor skills, her eagerness to complete all tasks to the best of her abilities, her social nature. All stuff we knew about her but lovely to see in writing from her teacher. She has had a wonderful start to her education, couldn't be more proud of her. :)
Posted by Helen at 8:50 PM 8 comments:

Simple Disappearing 9 Patch Block on the front, two fat quarters sewn together for the back. But I am proud of the label. 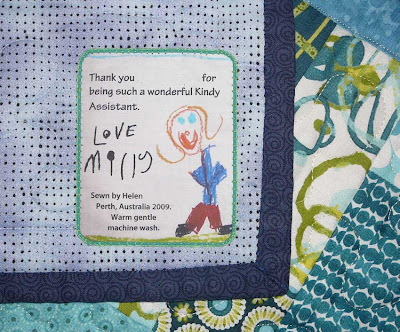 I got Matilda to draw a picture of her teacher, photographed it, imported it to Photoshop and added the type, then printed it out and sewn on like described here and wolah, fancy label I know the teachers will ohh and ahh over!

And I have just one more runner to complete! Hate to say it, but it's another D9P block, small 2.5 inch squares though and cut from the stash, no charm squares for this one!
Posted by Helen at 7:42 PM 8 comments: 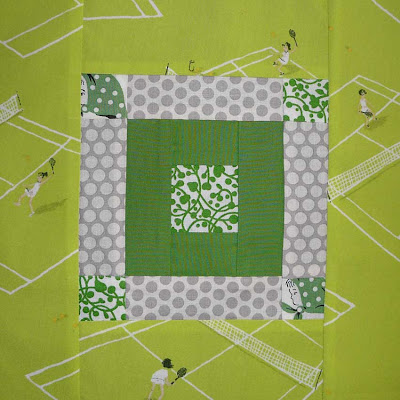 I have given myself a little break from my Christmas Table Runner Marathon and spent the last few nights working on Sheridan's blocks for Decembers round of our Around The Block Swap.

The above block is my favourite, love those ladies playing tennis! It's the largest block at 9 inches. 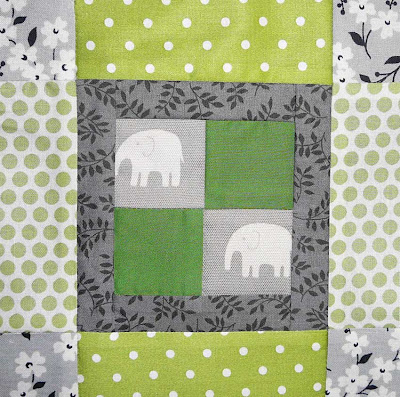 Sheridan choose squares and sent a lovely selection of grey and greens to play with. I haven't sewn much with grey but these were so much fun to whip up! Her specifications were to use both grey and green in each block and any size from 7 t0 10.5 inches which was perfect guidelines for me. I like sewing a bit and then seeing if it needs a bit more or not. The above block is just under 7 inches, squeezing in at 6 and 9/10th's..... Is that even a fraction I wonder? I am hopeless at maths. 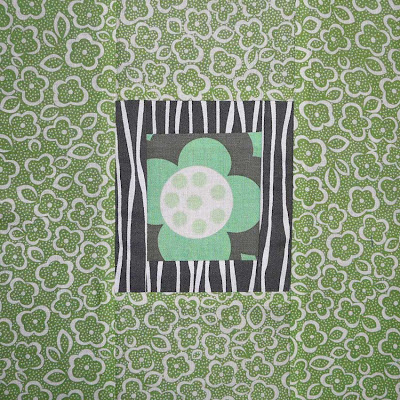 And the top block is 8 inches square. Bit of a plainer block but sometimes you need the plain blocks to make the others sing! So I hope you like these Sheridan!
Posted by Helen at 10:31 AM 8 comments: 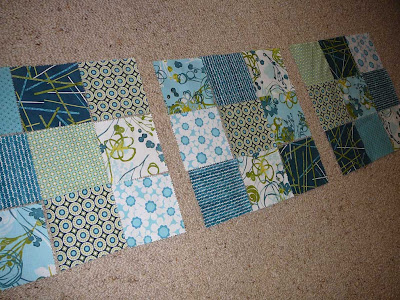 This is such an easy runner to make. I'll do a tutorial here to show you just how easy lemon squeezy it is! I made this one with 27 charm squares, these ones are 5 inch squares. So lay them out into 3 groups to form a 9 patch block. Keep in mind that the squares in the corner of a 9 patch block will not be cut, so make sure that is a print you really like. The square in the middle of each 9 patch will be sliced twice, so keep that in mind too, busy prints or a neutral work best for the center square.

So once you are happy with the placement, sew them into 9 patch blocks. Hopefully they will stay in order! I always seem to get one row mixed up along the way. 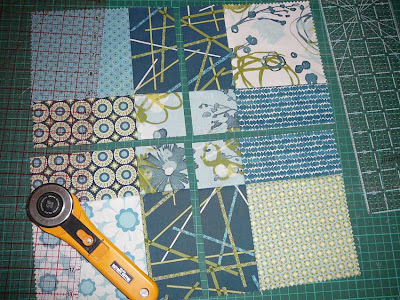 And this is the fun part! After ironing your 9 patch block, slice it in half, rotate it and slice it again. So your block now becomes 4 blocks. 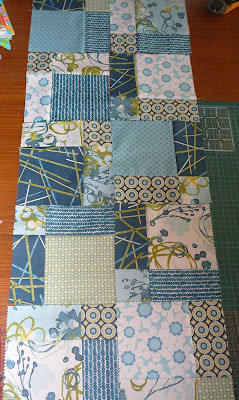 After you have cut all 3 of the original 9 patch blocks together, you now need to arrange the 12 new blocks in a pleasing manner. For this one I regrouped 4 little blocks to make one big block again, so I had 3 large blocks to make the runner. I tried to have 2 little squares in the center of each block facing the same way for each of the 3 larger blocks. Does that make sense? But you could really arrange the blocks anyway you wished. That's the joy of a Disappearing 9 Patch block, it doesn't really matter!

So once you have sewn all those blocks together you are on the home stretch! To make this runner just a little bit bigger and to frame it, I added a border of 1.5 inches as above. 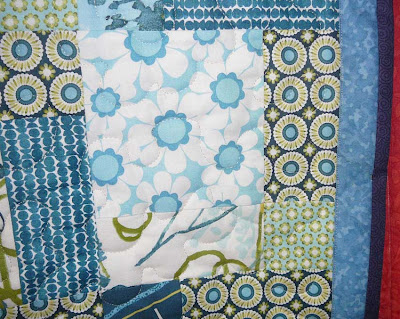 Quilt as desired. I just did a meandering stipple all over the D9P blocks and an echo stitch just inside the border. Binding is on and pinned in place ready to hand sew down for this one. 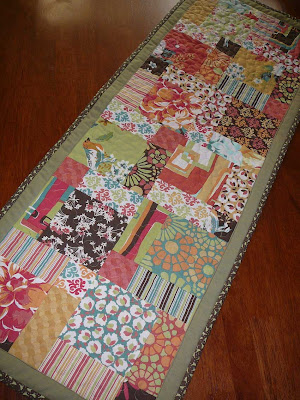 Despite a busy week outside of my blogging life, I finished table runner #4! Just a simple Disappearing 9 Patch block with some Moda charm squares I have had since.... who knows when! These runners have been great for stash busting! 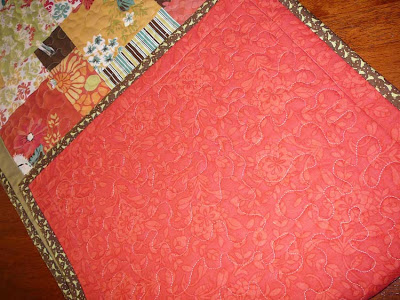 The binding was left over from this quilt. And the backing was a perfect half yard cut from equilter earlier this year too. I just did a quick stipple over it. I can't emphasis enough these are quick, easy and simple runners! I am making the exact same pattern for Runner #5, nearly ready to sandwich it. I think I'll do a tutorial so you can see how easy peasy it is!
Posted by Helen at 7:57 AM 13 comments: