A Rainbow for a Baby. 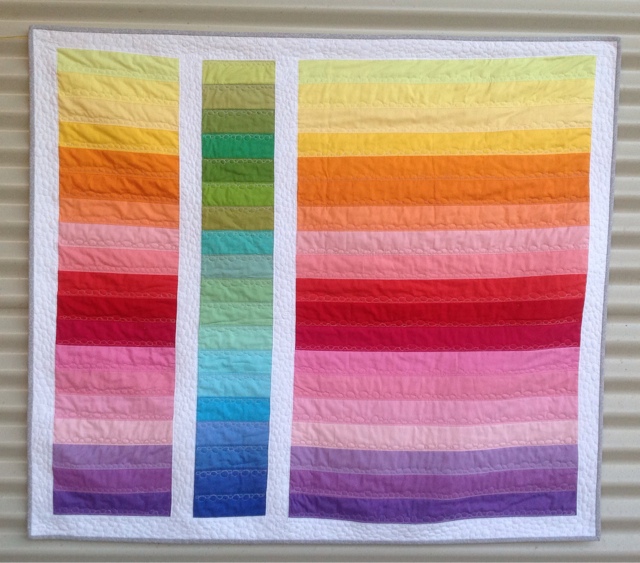 I finished this quilt on the weekend. It's one of the ones I made on the recent quilting retreat. 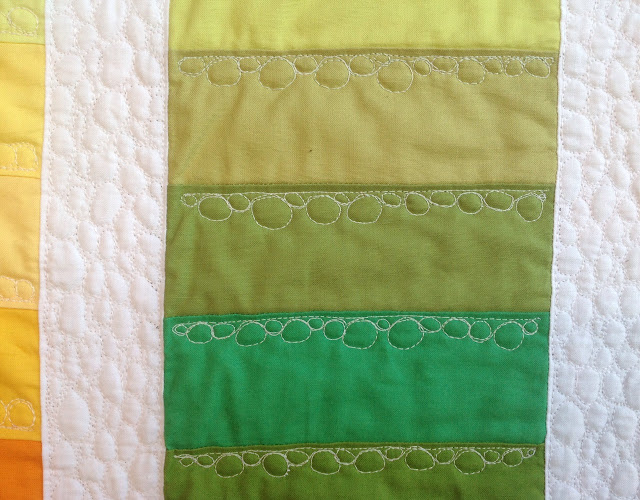 I'm happy with the pebble quilting. 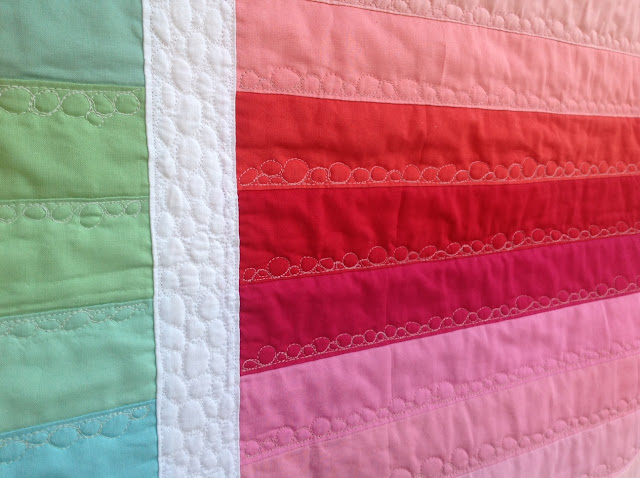 Just a row of pebbles but I rotated them in the three blocks. 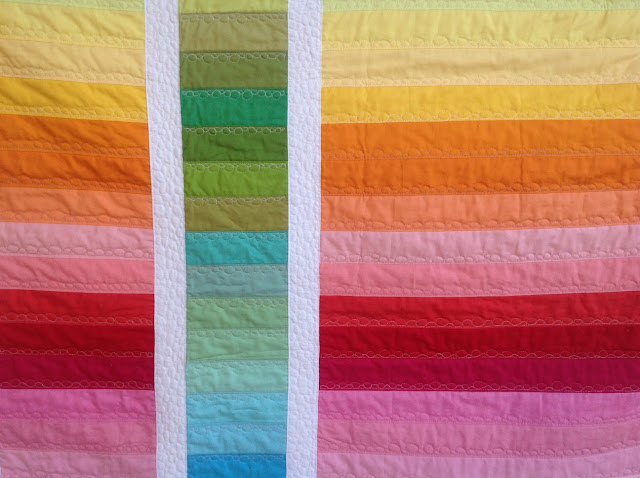 Lots of threads to tuck away at the end but worth it for the effect, 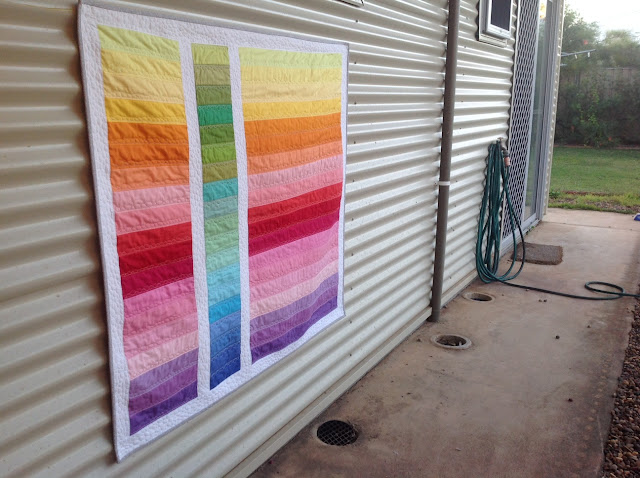 And to show that photo shoots aren't glamorous in our house, here is the side view of the quilt on display. Now its all rolled up ready for delivery in two weeks,
Posted by Helen at 8:46 PM 7 comments: 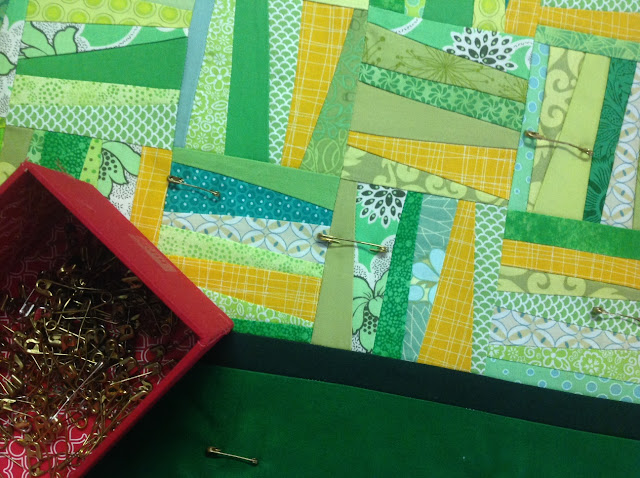 Well after getting annoyed by my walking foot issues and goggling and sniffing around the internet I thought that maybe it was the fact I was using a spray adhesive to sandwich my table runners was causing the grief. So I sewed together some more scrappy squares to make into another table runner. I do have two cot sized quilts ready to sandwich but I didn't want to do my experiment on them. Once I had the squares done it was quick to cut them down to 3.5 inches and then sew them all together, that is actually a deep green as a border, not black as it looks in the picture. So all ready to go and I got out the pins and pinned away! 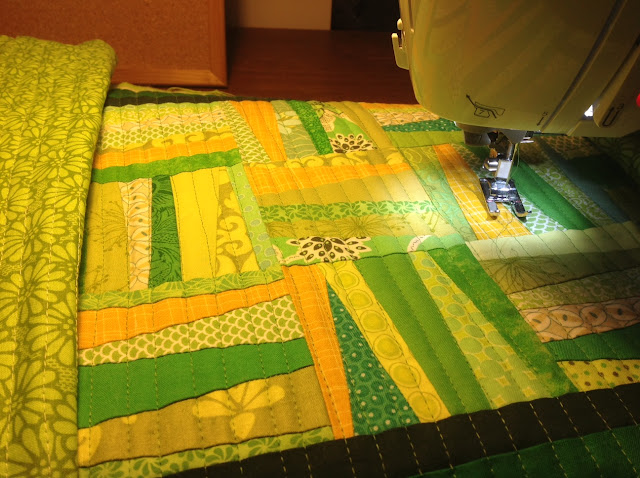 Then, new needle in and away we went and surprise, surprise, still skipping! Arggg! So I took out my King Tut thread I was using and decided to try my green Aurifil thread instead. Well, that was better, only skipped once in a row instead of five times with the King Tut. But by now I'm back to thinking its my walking foot because when I was piecing the top of this runner, not one single skipped stitch! So I took the @#$%%=*!! walking foot off, unpicked the five rows I had just done and replaced it with an open toe foot and started again. The result? Absolutely perfect. Go figure!

So to save myself going through all that grief again, here are my quilting specs:
Pressure dial on the back of the machine - 1.
Upper thread tension - 4.
Stitch width - 2.5.
Stitch length - 4.
Top thread - Aurifil 50.
Bottom thread - King Tut.
Direction of quilting - Down, pivot, back up, pivot, down etc. 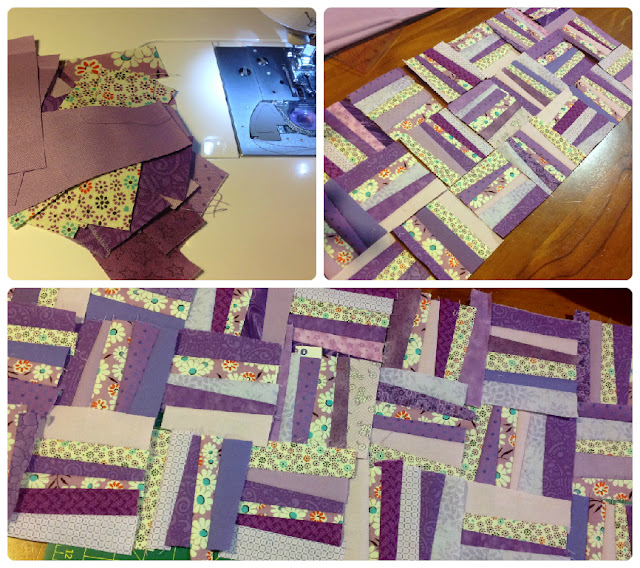 It was a long weekend here last weekend and the husband took off for a three day trip with the boys to Melbourne to watch some games of footy *yawn* which equals a whole lot of uninterrupted sewing time! A friends Mum is visiting and it was her 70th birthday shortly after the weekend, so what better pressure to set myself than a deadline of the weekend to sew a table runner as a birthday pressie? So with her favourite colour noted - can you guess what it was? - I set up the ironing board in the kitchen and popped a new needle in the machine and away we went!

It had to be a simple design and I took inspiration from my green/blue/yellow lap quilt and cut up wedges of purple and sewed them into roughly 5 inch squares, then I trimmed them down to 4 inches trying to make sure I had a wedge of the Dennis Schmidt fabric I purchased in San Diego in each block. 18 blocks later I was ready to sew it all together and sandwich it and get quilting. 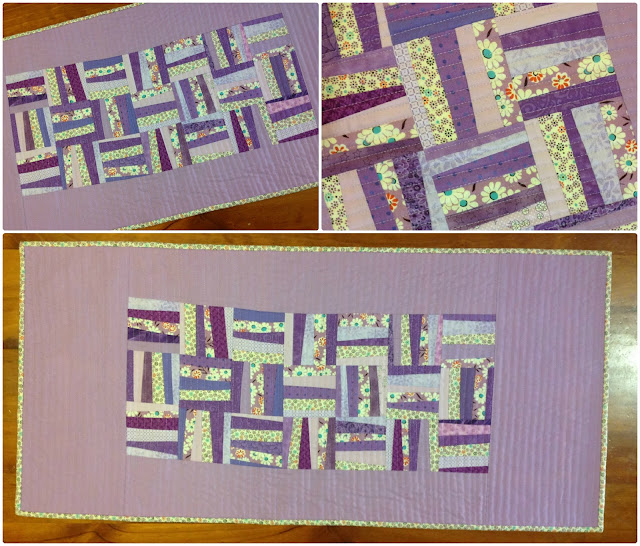 Here is where the grief commenced. I popped on my new walking foot that arrived back in March, put a new needle in the machine and started sewing, my usual straight up and down quilting style. After about the sixth row, the machine started skipping stitches. At first just one a row, so I slowed down, then the next row it was a few more skipped stitches. Odd I though. So I stopped, rethreaded the machine and continued, still skipping stitches. So I stopped again, cursed, changed the bobbin, rethreaded again, checked the needle was in properly and went off again. Guess what? Still skipping! More cursing, I took open the bobbin case and cleaned out all the dust, replaced the needle. rewound a new bobbin and started again. Still skipping!! I was getting to the stage of chucking my machine against the wall by now. The weekend was drawing to a close, I wanted this finished, so I took off the walking foot and unplugged the naughty machine, put it on the floor by me sewing table and got my other machine out, popped the walking foot on that and continued away. No skipped stitches now but a gradual pulling down of the fabric..... Why is that? It is sewn with a walking foot, it should be even, it is a small runner, I hold it up as I sew, there is very little drag. I know some people suggest you should go up and then down when quilting like this but to be honest I don't like the little zig zag effect it has on the edge of the border. But maybe that zig zag is better than this huge pull?? I'm going to do another runner like this and then experiment, up and down and also sew one on my friends Bernina, maybe it is my machine in general? I ended up gifting the runner to my friends Mum, she didn't notice it. Meanwhile my naughty machine is still sitting on the floor in time out.
Posted by Helen at 8:41 PM 2 comments: