Half of the Gibb River Road.

My poor neglected quilting blog. It's been a month between posts! I have a really good excuse though, we have had school holidays and we went away for a ten day jaunt down the Gibb River Road and to Broome. It has taken me a few days to go through all the photos and find the time to write this post now school has gone back and holidays are over. There is no sewing talk or photos at all in this post, here goes...The Gibb River Road was originally a track to transport beef to the ports of Wyndham and Derby. It is only accessible in the Dry Season, it travels for 700kms through the Kimberley, it is an experience! When friends said they were going to do half of it for the school holidays, we jumped at the chance to join them.

Day 1 - We leave at 5.30 for Fitzroy Crossing, its only 4 hours down the highway. After setting up camp at the local caravan park we take a boat cruise down Geikki Gorge and the kids are very impressed with all the crocs spotted in the gorge, I think 38 was the final total.
Day 2 - We pack up camp and drive into town to buy the girls and myself some tracking shoes as I didn't think to pack them. D'oh! We found some for $15 each. We then drove onto the Gibb River Road and went to Tunnel Gorge, hence the need for waterproof tracking shoes! Tunnel Gorge was dark and scarey in places. Had lunch in the carpark and then back in the car to Windjana Gorge. Stopped at the way to look at the ruins of an old police station that held Jandamara once, I think it was here that one of Graces tracking shoes fell out the car..... Arrived at Wanjani Gorge and set up camp. Knocked 3 minutes off our tent erection time from the night before. Walked only a third of the way up the Gorge as it was getting late. Crocs are everywhere on the banks.


Day 3 - Woke up and walked the whole length of Windjana gorge, well correction, Grace, Helen, N. and I. walked the whole 3.5 kms one way, everyone else turned around at about the 2km point. Not the most impressive of Gorges. Packed up camp and we drove to Bells Gorge while the R's continued on to Charnley River station for the night as they had already seen Bells Gorge previously and we were to rondeveu with them later that evening. Bells Gorge was very beautiful. Due to time, we didn't walk down to the bottom tier for a swim. Next visit definitely would spend a whole day there. Meet the R's on the driveway up to Charnley River station, a 43km long driveway, was surprised that they weren't already there set up, they had got a flat tyre! Set up camp, knocked another 2 minutes off the tent erection time!

Day 4 - A leisurely morning around camp. We packed lunch and drove to a gorge called Grevillea Gorge. The kids liked this one as you had to climb down a ladder to get to it. Water was freezing but everyone went in for a quick swim. Back to camp to have chocolate orange cake for tea in the camp fire.

Day 5 - Left Chanley river station and headed to Imintji Store for what was possibly the worlds most expensive sausage roll and choc milk! Headed down the Gibb towards Derby. Arrived in Derby mid afternoon. Not giving two hoots about our tent erection time now and added 12 minutes onto the time! Nice green lawn in caravan park on the very last row opposite a 6 foot mesh fence separating us from the mud flats of Derby.

Day 6 - A quiet night if you don't include the drunk telephone conversation at 2am from someone over the other side of the mesh fence on the mud flats who got left behind and was making sure we all knew about it! Packed up camp and then had a quick look around Derby. Brought three mud crabs for dinner and drove down the road to Broome. Arrived in Broome and set up camp on a small patch of dirt amongst backpackers that seemed to have been living in their tents for a few months..... Had mud crabs and takeaway Thai for dinner. 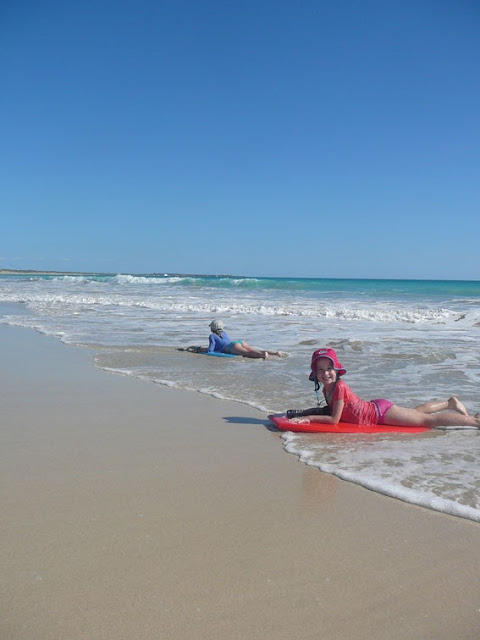 Day 7 - Did some shopping at the local markets then hit Cable Beach. Hired an umbrella, two deck chairs and two boggy boards and everyone was happy! Beautiful weather and the water was crystal clear. We noticed at the front of the caravan park there was a sign saying there was vacancys for 2 bedroom cabins which was what we had orignially wanted but were told back in March when we booked there was none available. So we quickly walked into reception and changed that! Dinner that night at Matso's, yum yum! Back to camp to find the backpackers had bit of a party going on at the camp kitchen table and chairs 2 metres from our tent.... Got the kids changed into their pjs and into their tents. Despite the noise they started to fall asleep until the backpacker from Scotland got out his Grandfather's bagpipes and started to play us all a jig! I went into our tent, Milly was crying "Mummy what is that noise? Tell them to be quiet! Don't they know we are trying to sleep?" Grace sort of went hmmffftt and rolled over and went back to sleep! Milly cried till they stopped 15 minutes later, Daz went down to the front office and got the manager to come tell them to be quiet. Quiet time was officially at 10, this was at 8.30. Funnily enough at 9.59 there was total silence as they had all gone to the local pub. 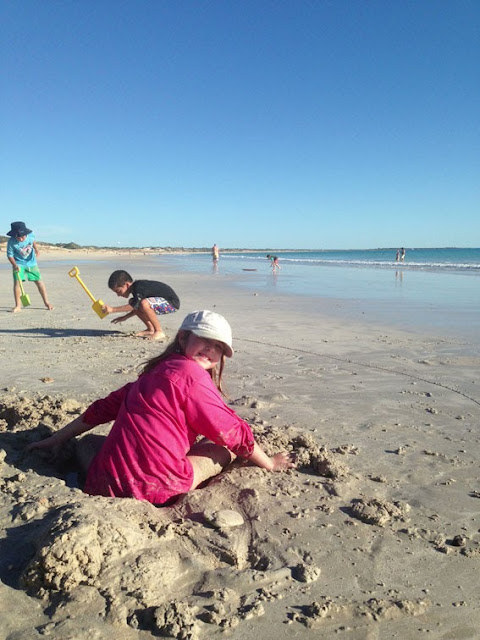 Day 8 - packed up our tents for the last time and moved into the 2 bedroom chalet. It was like moving into a palace! Took the kids to see Despicable Me 2 at the movies. Then back to Cable Beach to recline under the umbrella on the deckchair while the kids boggie boarded and built sand castles. I love that Grace is 10 and still builds sand castles. Dinner that night at a nearby cafe where the kids and men played putt putt golf. Back for an early night in our luxurious chalets!

Day 9 - Helen and N. go shopping alone, new running shoes, dress and bathers all successfully purchased! Then after lunch it was back to Cable Beach one last time to recline on that deckchair and watch the kids boggie board (again!) for the last time till next holidays. Dinner that night was at the fancy Wharf restaurant, oysters, chilli muscles, fish and chips, something for everyone. Back to the chalet to pack the car while the kids went to sleep.

Day 10 - Left Broome at 5.30am. Drove and drove and drove till we arrived back in KNX at 6ish. Would have been an hour earlier but Daz and M. stopped outside of Doon Doon to help a couple change a flat tyre on their camper van. Everyone is very happy to be back in their own beds that night! So there is our adventures of Broome and half the Gibb. Hope you enjoyed it. Ten weeks till the next holiday!
Posted by Helen at 10:50 AM 5 comments: