Hope you all had a Merry Christmas! Survive? We did, only just though! It was all a bit rushed, rushed, rushed. Next year I might put my foot down and say Christmas is here and all the family can come to our place instead! Anyway...... look at the best two pressies a girl could get! 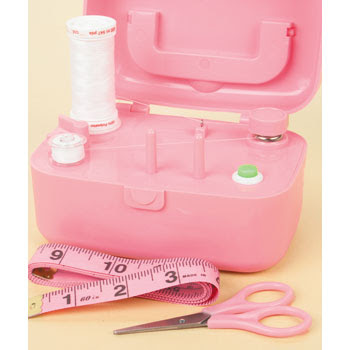 A pink Bobbin Winder! How cool is this?! No more unthreading my machine to wind up a bobbin when half way through doing something. It runs on 2 AA batteries or plugs into the wall. So simple even Grace worked out how to use it! Thanks Ad, what a legend of a sister! 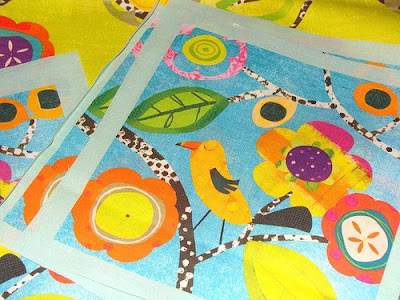 And this stunning block arrived from Amy Schimler at Red Fish Circle on Christmas Eve, a little pressie to myself. It's 7 x 7 inches, it is just beautiful, I love the texture even though it is smooth to touch. Don't know quite what to do with it yet, it will be the centre of some wall quilt I am sure. 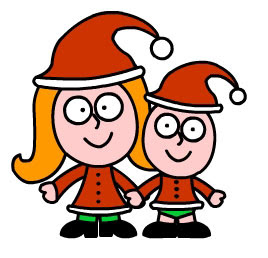 Well the fat man in red is nearly here! Wishing all those who read my blog a very Merry Christmas, all 8 of you! Thanks for sharing the sewing and quilting joy of 2008. Looking foward to doing it all again in 2009.

I have stockings to stuff for two little sleeping girls, they are so excitied! They finally aren't scared of Santa and get Christmas. Then I have to go eat half a carrot to prove the reindeers have been in the lounge room.....

Our latest art from Arianne. 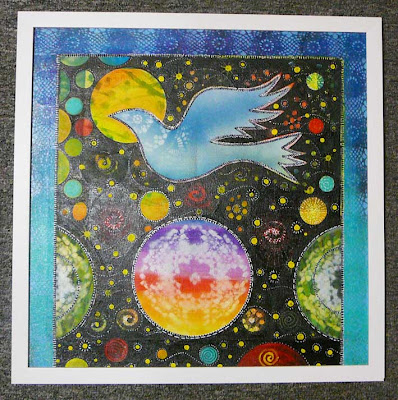 Well I haven't been doing any sewing myself lately, but on Friday night I did help the local art community by buying these two peices from my friend Ari! She had an exhibition opening down Freo way, exhibiting 100 46 x 46cm canvas's. 100! So Daz, the girls and I went along. I wanted to buy something for Daz, a lot of art on our walls is my taste, especially the dolls quilts. So he picked the above painting, titled Flight of the Devine Winds. Could be symbollic of the year ahead of us in 2009 if Daz gets accepted into Uni.... I like the blue textured background and in the black is all these tiny detailed dots of white making patterns.

I choose this one for me, to add to my collection of dolls quilts, although its not a dolls quilt, it could be! Ari said to me "what are you getting this one for? You could make it yourself!" And, yes, its free motion stitching on felt with some hand stitching as well, but I loved the looseness of this, it felt free, my work I sometimes feel is too stiff and tight? So some inspiration for me. 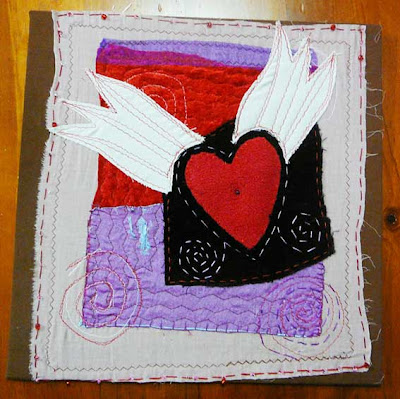 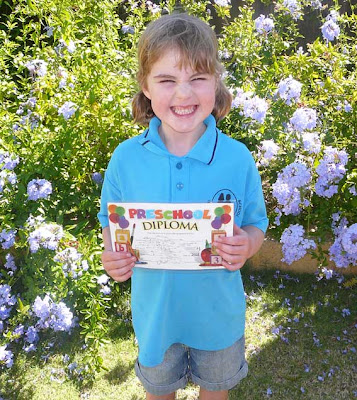 We had the big class graduation and concert yesterday afternoon. Seems like only yesterday that I was posting here when she started school! She got a lovely report, is doing very well in all the important areas of literacy and numeracy skills but the comment that made me smile was "she is a cheerful girl with a great sense of fun. It has been a pleasure to teach Grace. She always greets me with a smile and a tale to tell."

PS - No WIP Wednesday as I haven't done any sewing all week. Wahhhhhhhh!
Posted by Helen at 3:51 PM 7 comments: 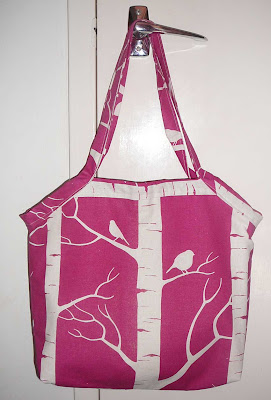 Two parcels sitting on my doorstep yesterday. Yahhh! In one was this sweet bag from my talented bagmaking blogging buddy, Cass! Love this print, I love how she has got the tree trunk right in the middle of the panal! The fabric is from Lara Cameron, Bird in Fuchsia its called, its stunning. I think if my memory is correct, Cass snapped up this in a sale before I even knew about it and I was spewing. And so she made me a lovely bag, thanks Cass. 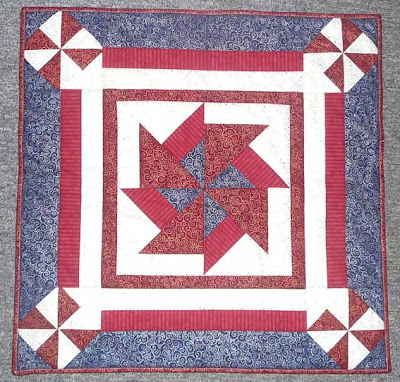 And the other parcel contained my dolls quilt from the Flickr Doll Quilt Swap #5 finally arrived! It is from LilFrankie all the way from the other side of Australia. It makes me think of a nautical theme with the red, white and blue and the swirly fabric suggesting waves. Thanks Lilfrankie!
Posted by Helen at 10:30 AM 5 comments: 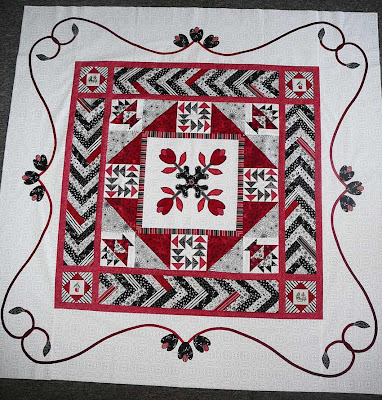 I picked up a registered post parcel this morning from the post office and was very very very excitied to find that my Round Robin quilt top has returned home! And when I opened it I just went ohhhhhhhhhhhh, its stunning! Love it! I couldn't be happier. It turned out quite big, hence the wonky photo above, I couldn't quite get over it to get a straight shot. It sits quite nicely on our queen sized bed, makes me think of adding a bit more to make it a quilt for our bed? 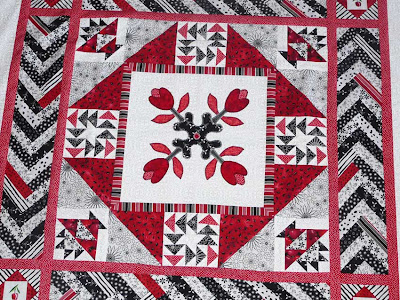 So I did the centre square back in February and then AJ sewed from the stripes to the red dotty fabric. I like the contrast of the deep red with little black watermelon pips fabric in the corners making a cut off triangle. And the dainty little flying geese going round in a circle! It looks great! 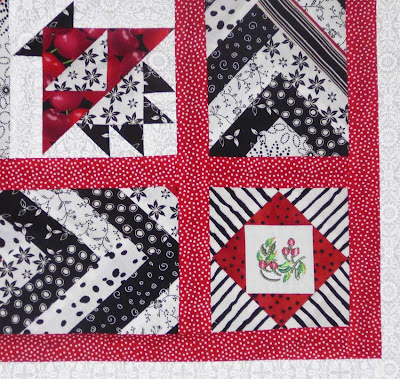 Then off to Joy it went. She has done this cool stip weave pattern, I really should become more of a "proper" quilter and learn what these blocks are called! Very effective. In the corners she has used her embrodiary machine to sew some little tulip and cherry motifs, I like how the black and white stripes lead your eye into them. 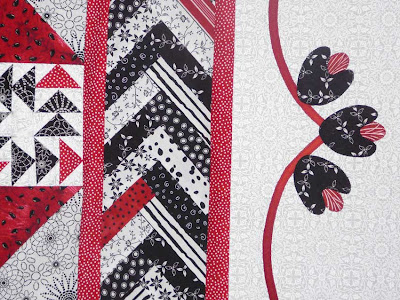 And then at last it went to Emma's house. Emma's border has really framed the quilt. I love all the white and how she has taken the same buds as the centre square to tie it all in. Its very, very nice.

The other Round Robin quilts are in different stages. Joy's is finished and back at her place too, check it out here. I have AJ's ready to post on Monday and I think Emma's is still at Joy's getting the final touches. A great round robin girls, I'm glad I participated, thanks for organizing it Emma.
Posted by Helen at 4:09 PM 15 comments: 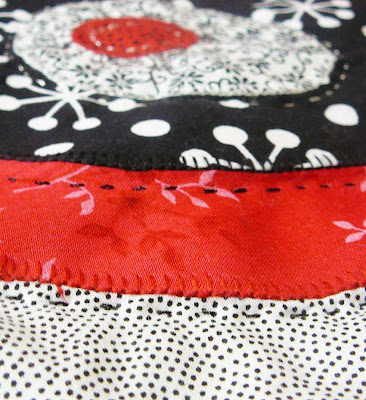 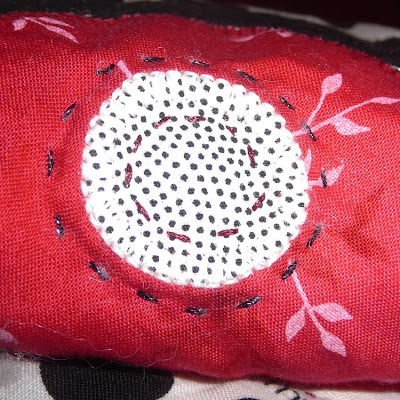 The last few times I have posted a WIP shot of this quilt I have freaked out a few readers of this little blog. They thought the colours I outlined in photoshop on the quilt's photo too show what I had done, was the actual quilting! LOL No girls!!! Funny chickadee's! Above is the real quilting. Getting there, slowly.....

Christmas at the moment means work, work, work. I have a small part time job in a big retail store as some of you know, and this time of year my hours go crazy! We don't usually have Sunday trading in Perth either but for December we do, so my sewing time is limited at the moment, sewing when I can, thats all a girl can do isn't it?
Posted by Helen at 5:03 PM 3 comments: 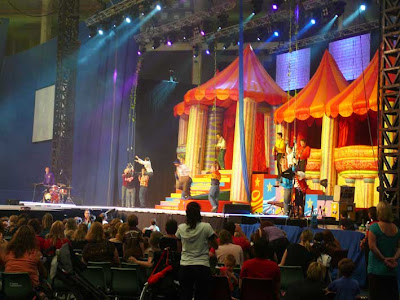 Milly and I along with a close girlfriend and her 3 year old son went to the Wiggles last Thursday! I realized it has been our 4th show, once a year we have been, every time they come to Perth. We may have moved on the Princess stuff and watch Shrek and Madagascar more on telly that their DVD's but they are still fantastic live. 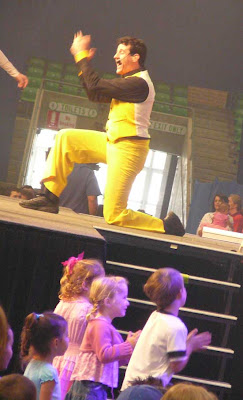 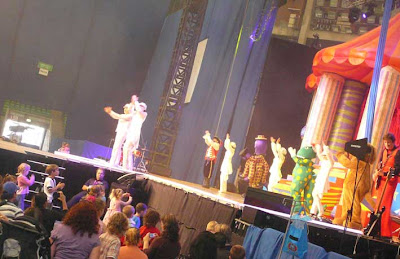 Left Grace at school, I think she's too old for them, but Milly is the perfect age to get up and dance. She had no qualms at leaving us standing at the side and wandering up to the toddler mosh pit where she'd alternate being clapping and staring! See her above on the very left in the pink top? Look how close she got! 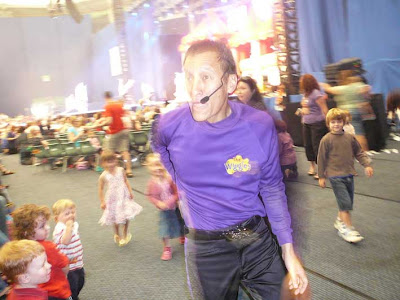 They always do a song where they go out to the crowd. It all happened quickly and Jeff was all of a sudden there in front of us, and I got flustered and didn't get the lense cap off my camera and the right settings set in time so I got this shot as as he walked past. Typical! See Milly in the back following him? The blurred pink top? Classic! 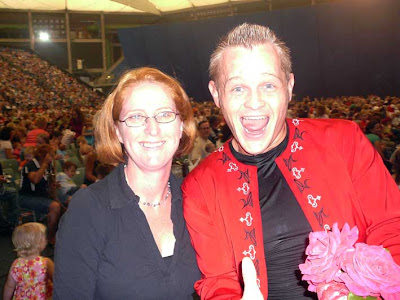 Now here is my favourite Wiggle! Well he's not technically a Wiggle.... Ben, the Wiggly Dancer! Watching him do his crazy wacky energetic dances leaping over the place, made watching Wiggle Bay 1,000,000,000 times bearable in those early days when we discovered them. It was the only DVD we had for awhile! Anyway, I think he's fantastic, I'll admit, I am a fan, he's great! So when he walked our way, I had my camera ready and my girlfriend took this photo. As he approached talking to the kids and collecting roses for Dorothy, I said "Excuse me Ben, would you mind if I got a photo with you?" If he was suprised that it was a Mum that wanted a shot without a child in tow, he didn't let on! He said "Sure!" Photo was taken, I said "Thanks so much, we think your fantastic in our house." and he said "That's great! Thanks so much" and then he touched the middle of my back as he moved away to collect more roses from the kids. And then I couldn't stop giggling for the next 10 minutes.
Posted by Helen at 7:17 PM 16 comments: 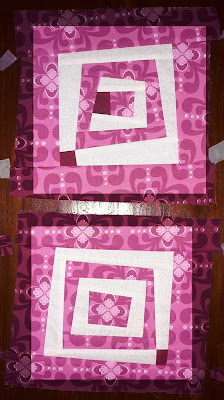 I'm thinking about making a quilt for Milly's bed with wonky square blocks. Spent a few hours today having a play with these. Pinks and purples on white I think. These would trim down to 8.5 inches.

Not starting till after Christmas!
Posted by Helen at 6:01 PM 12 comments:

Give Away Day Winner! 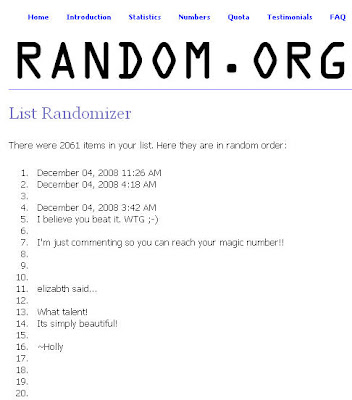 312 comments????!!!! OMG! That just blows me away! I feel so humble!! I was thinking 80 or so comments. Last night I had my blog open in one window and was doing other stuff in another window, I'd do back to my blog and hit refresh every 5 minutes to find another 10 comments added! It's going to be hard to beat that for my next blogiversary giveaway!

And so we have a winner! Elizabth from Bits of Sunshine, congratulations, this will add some sunshine to your house. ( I copied and pasted all the comments into random.org and the first user name that come up was the winner.)

Thank you all for your lovely words and encouragment. I'm just amazed that people out there like what I do. I have found some lovely blogs too from linking back to the comments, thank you everyone, wish I had 312 quilts to give away, or rather 311, I saw you Car post twice. Cheeky!
Posted by Helen at 2:16 PM 6 comments: 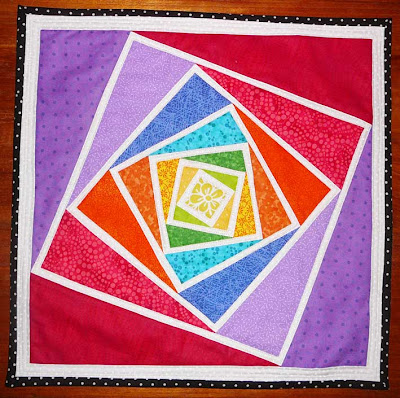 It is Give Away Day. Yahhh! I have this mini wall hanging quilt up for grabs. It measures just under 17 inches square, has a pocket on the back all ready for a peice of dowel to pop in and be hung on the wall. I haven't labelled it, I'll make a label for the winner. You can enter if you are overseas or in Australia, just leave a comment and I'll do the random draw thingy.

I had 61 comments in my July 2 Year Bloggiversary Giveaway, wonder if I can beat that? Good luck!
Posted by Helen at 4:10 PM 315 comments: 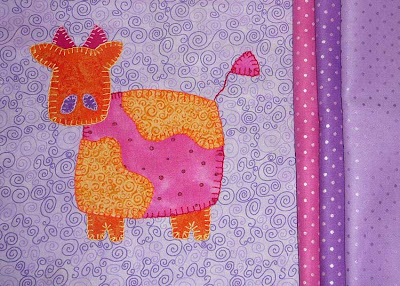 Another square cut from this UFO wall hanging to make a mini quilt. I need to add some eyes and it's just going to be a quick little mini for a friend. I miss making mini quilts from the flickr mini quilt group, when the Mystery Quilt is finished and maybe the Squid Eye, two big projects then I'll get back into it, once the hype of Christmas is over.

WIP Tuesday hasn't the same ring to it as WIP Wednesday but tomorrow is Give Away Day......
Posted by Helen at 4:07 PM 5 comments: