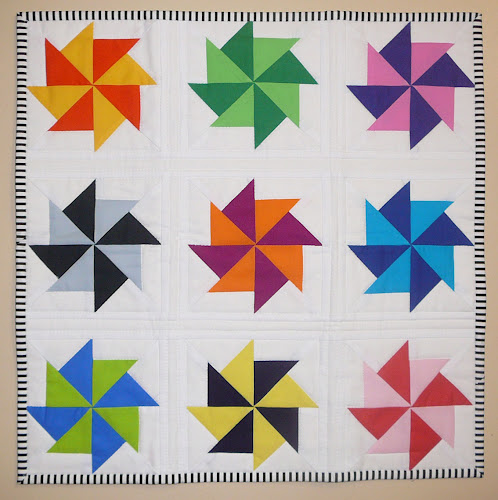 It is the exciting time of the DQS#11, the receiving! Mine should arrive at it's new home any day now, but look what arrived at my house yesterday! An absolute beauty from the amazingly talented Rita from Red Pepper Quilts! "Ohhh, that's very you" the husband commented when I showed him excitedly. Yes, bright colours on a crisp white background with a strippy binding, very me! Thank you Rita! 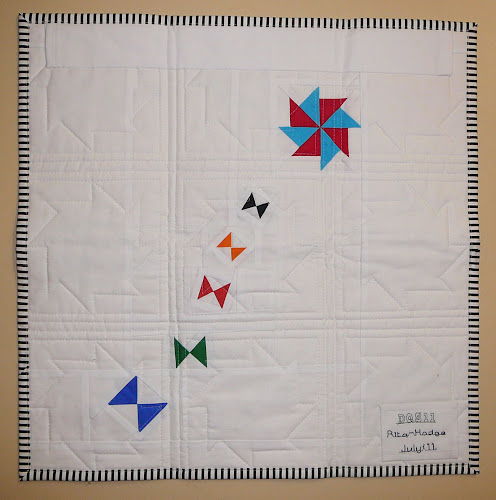 I had to pinch myself. Look at the back! 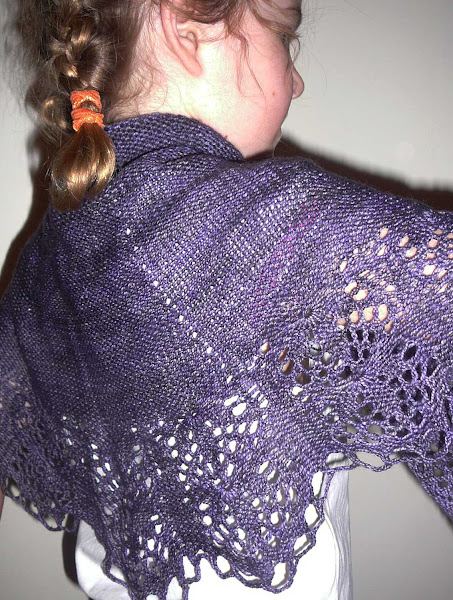 And wait there is more! She knitted me this sweet little shawl. Even though Grace is modeling it in this photo, she will not be wearing it! We have a fancy school social event on Saturday night, guess what I am wearing over my little black dress? 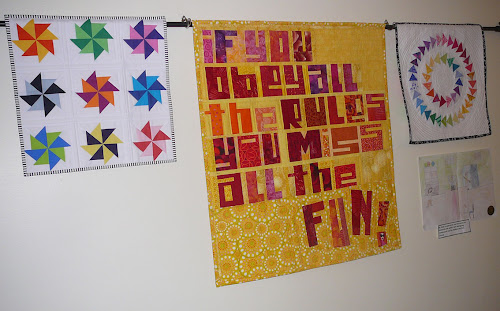 And I took down a quilt I had made for the last round of the swap and replaced it with Rita's masterpiece for all to see that come in the house. Thanks again Rita. I feel very lucky to have a Red Pepper Quilt in my house. 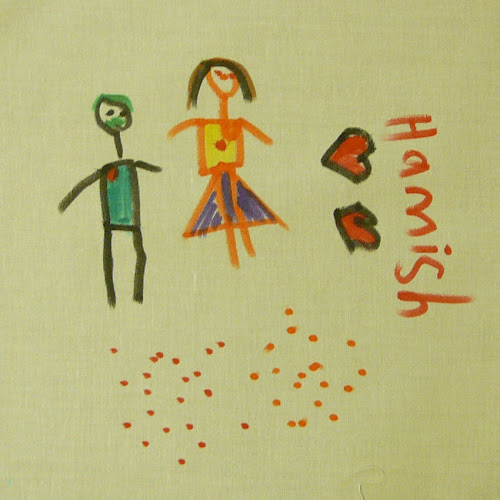 Matilda's beloved teacher is getting married in the upcoming October school holidays. At first I thought I would make her a "normal" quilt for the occasion. But then after seeing the amazing quilt Andi had made with the 5 and 6 year old children in her daughter's class, I changed my mind and thought let's make a quilt for Miss W! 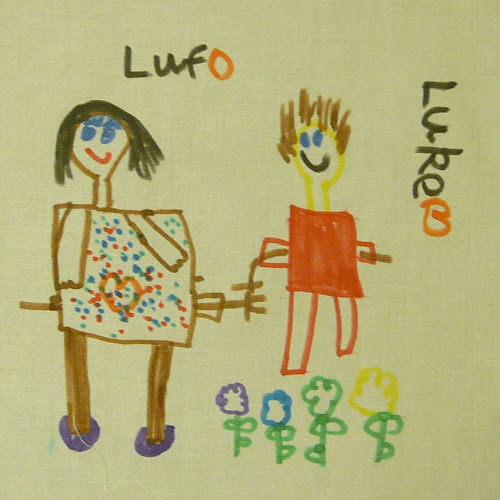 It's top secret from her, I have made each child pinky promise not to tell her and so far, so good! Because I work at the same school as my children go too, I have been able to sneak out at recess and lunch time and sit with 2 or 3 kids and assist them draw their square. I've told them that it's for Miss W and Mr H and they are getting married, what can we draw? 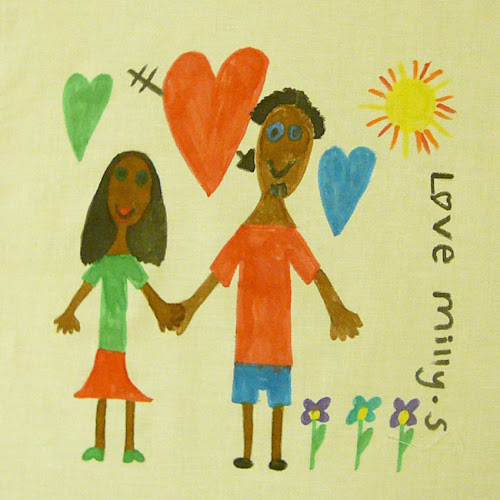 Lots of love hearts, flowers and smiling faces. They are on white homespun but my camera is making it look more cream. I have 6 more kids to get to do their square, then I can start sewing them together. Maybe this will help get my sewing mojo back cause at the moment it has disappeared! 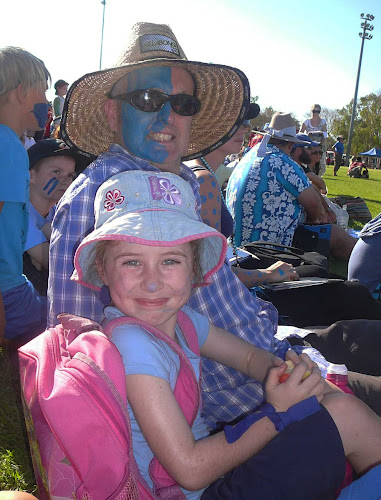 No sewing this week. As usual it has been a flurry of activity this week. Last Thursday we had the school sports carnival. It is a twilight affair running for 7 hours after our normal school day. It is exhausting but we do get the next day off school. Milly enjoyed one of the perks of having a Daddy who works at the same school she attends, getting to have a cuddle while waiting in our faction bay for events to commence! 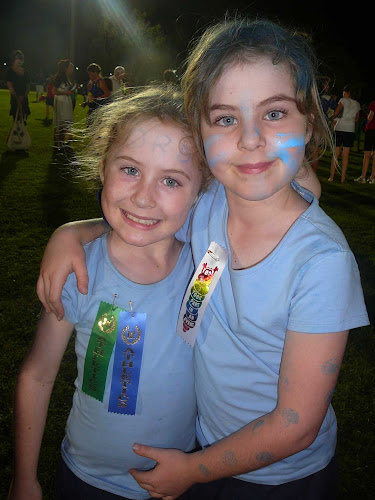 We were pleasantly amazed to discover that week that Milly could run. I mean run fast. A few days before the carnival they had a morning of running trials. Every grade had to run around the oval, out of about 50 grade 1 girls, Matilda came third! Third?? So on the night of the carnival she came third again in the grade 1 girls first division! And then the grade 1 mixed relay team she was in, came first! We have a runner in the family!!! Very proud. 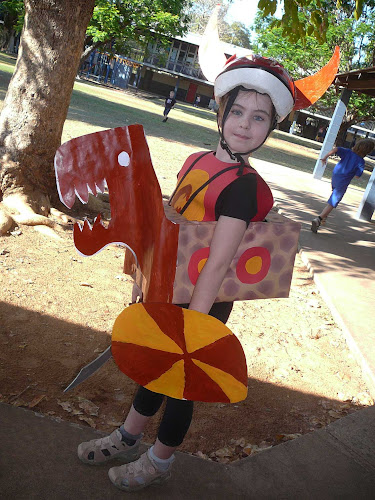 And this week we have had Book Week. Celebrated a week early for some reason...... We had the Kimberley Writers Festival a few weeks ago and Grace attended a workshop by an illustrator and cartoonist called James Foley who has just illustrated his first book, The Last Viking. She was inspired so we spent Monday after school with some cardboard, paint, brown wrapping paper, lots of staples and sticky tape to transform a beer carton and stack hat into making this costume. And we, oh I mean she won a prize, a book! 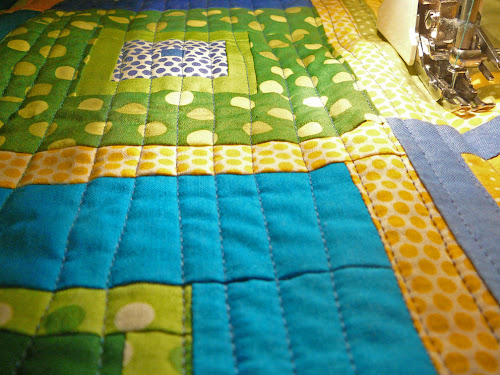 I finished the backing for my Jewelled Squares quilt on the weekend. I immediately sandwiched it and popped the walking foot on the machine. 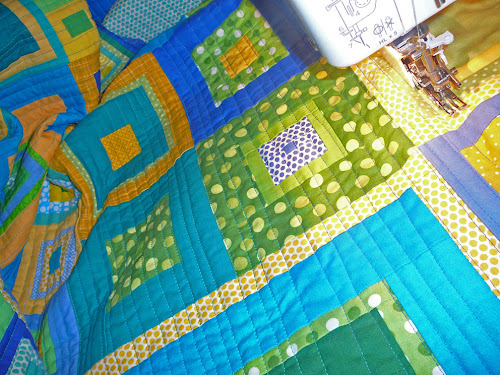 Down and then back up. And then down and back up and then down again and back up. You get the idea. To make it more exciting for me I am using two spools of thread, a few lines of green, then some of blue. I haven't marked the lines, I'm just doing it by eye. As you can see some gaps between the lines are bigger than some other gaps. I like that. I am more than happy with that effect! 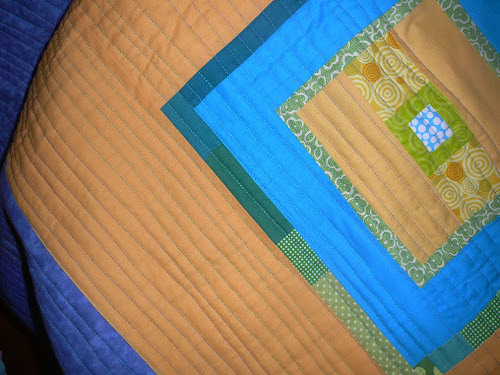 I love the back as much as I love the front! I hope to finish it on the weekend..... And am already thinking of doing another one. There is something about squares...... 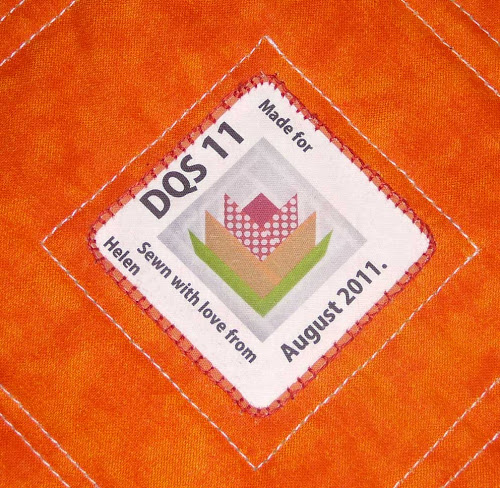 While watching the finale of a certain reality TV cooking show last night, I finally got around to sewing on the label for mt dolls quilt for DQS#11. 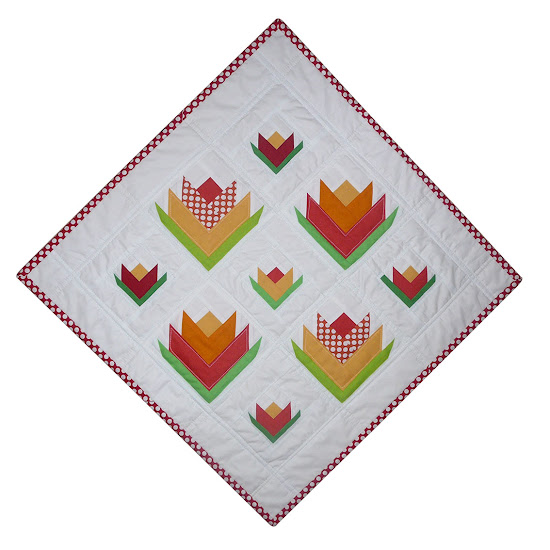 It's all finished! It measures 17 inches square exactly. Lucky, as the rules were 18 inches and under. I used a polka dot binding from some material my sister sent up last month. I know my partner likes polka dots! 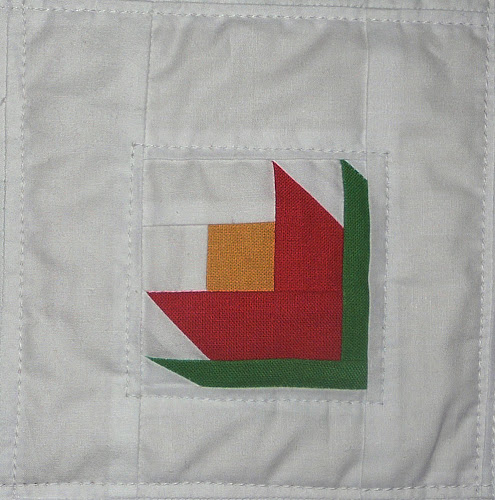 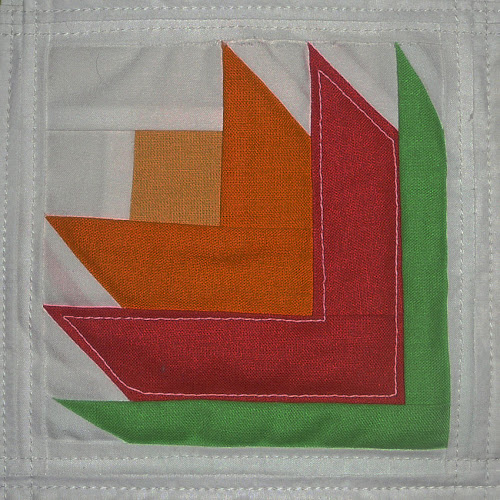 And the same with the larger flowers as well as around the largest petal. Thought I would do it in white rather than a red or yellow so it added some contrast. My partner indicated that they do not require a hanger as discussed here. So that solves that problem for me! 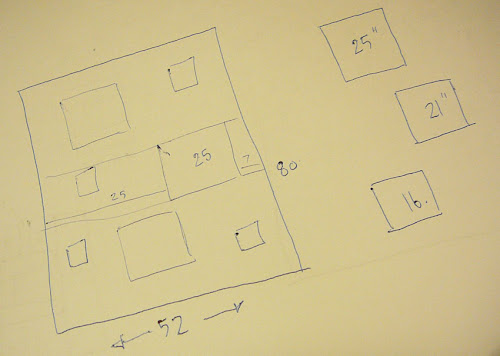 I'm working on sewing down the binding of my tulips dolls quilt at the moment, savoring the hand sewing bit. But the action under the sewing machine has turned to the backing for my jewelled squares quilt. It has been awhile since any WIP Wednesday post, I think it's time to get back in the Wednesday sewing groove. I don't have enough of one fabric to have a solid colour for the backing so I am taking the square theme from the front and making them bigger on the back! 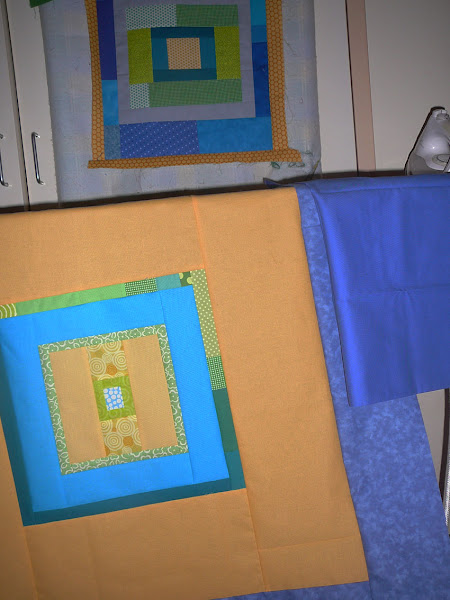 And more random in their placing. Think I have enough blue in the stash to pull it off....
Posted by Helen at 8:43 PM 3 comments: